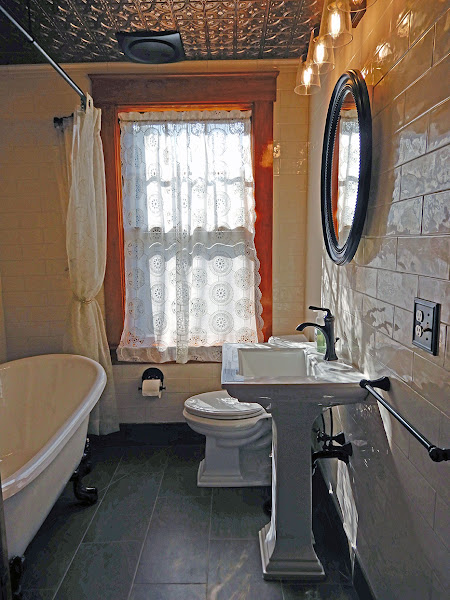 One of our bathrooms was finally remodeled this summer. The house was built in 1925. The bathroom was remodeled around 60s by its look. 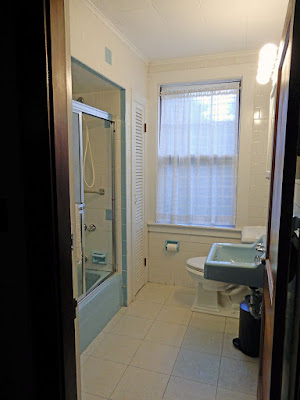 I don't know this structure was in trend back then or not, but it just doesn't make sense to me. 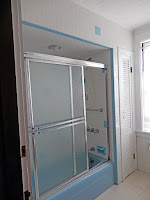 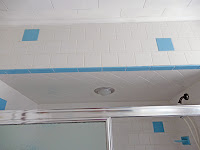 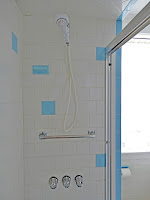 The boxy look cannot avoidable because of the tub shape, but why is the ceiling dropped above the tub? Did they want the baby blue trim? This makes the bathroom look tight. Especially in the tub, it makes you feel claustrophobic. The shower doors are also playing the part for it.

To set up the tiling wall, a part of the original window trim and the molding got chopped off. This was one of the most upsetting about this bathroom to me. For this ugly bathroom, the beautiful feature of the house got sacrifised. On the top of it, they also painted the trim and the window.

The bathroom was definitely showing its better day. Over the time, the grout began falling. So as some tiles. Not mention mildew from the lack of a fan. 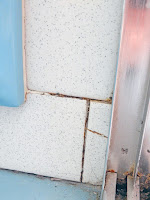 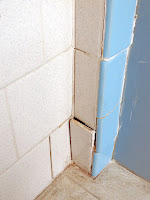 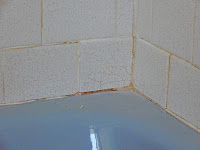 Mineral built up on shower doors. It had been also eating up the tub spout. 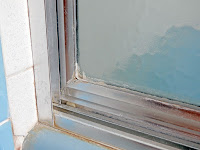 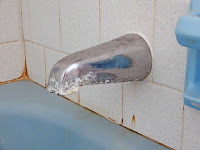 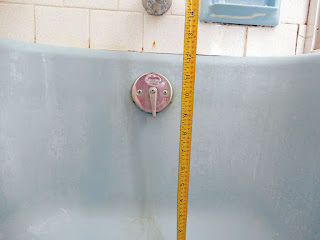 Lots of gross factors had been going on. It doesn't even make you feel like using the tub at all. We'd been using this bathroom as a half bathroom.

Another thing always questioned me about this tub was the water depth. The bottom of the overflow hole was 8" above the bottom of the tub. Water wouldn't cover even a half bottom of a body. How did they stay warm in the tub that water coudln't cover up to the shoulders? This is not a kind of a tub to soak and relax a sore or cold body. It makes me wonder if they ever used the tub. 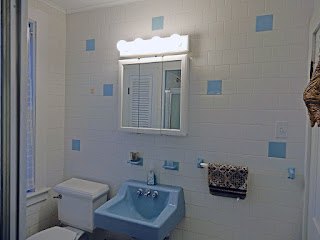 The lovely baby blue theme continued to the sink side. The cup holder, the soap dish, the towel bar and the toilet paper holder, they were all matching.

We replaced the toilet. This was the only keeper in the bathroom. When our plumber told us the old one was using 10 gallons of water at every flash, we decided that one had got to go.

Despite of its dated look, the sink was nice and compact in the tiny bathroom. It was mounted on the wall, so it helped opening up the space. It was the best feature of the room besides the new toilet. 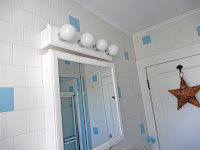 Another ugly thing I couldn't stand was the lighting. I see this style at hardware stores today. Why? Is this popular style here in the US? I've seen one with a glass base board. This one is even worse. They look so cheesy and ugly. What makes people inspire to buy this style for their home? I'd never get that. 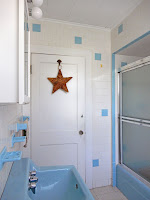 When the previous owner put the house on the market, they put peel and stick tiles on the floor. Not only it's not water proof, but also they are easy to get tiny scratches to capture dirt and dust. Vaccuming and mopping didn't get rid of them successfully.

Like the window trim, they painted the door as well. The trim of the door was not original. It was not matching to the window's at all. I cannot tell what happned. The only good thing was they kept the original hinges. Both trims needed to be replaced to match ones in the house. They woudln't be an exact match, but they would look much better than what they were.

Anyway, this was our starting point. The goal of the project was to have a functional bathroom which has a feel of the era the house was built.

It's been 5 years since we casually started talking about the remodel although the 5 years were not all active working time.

It took about 2 years for gathering ideas, setting a direction, selecting cosmetic items. We had no reason to rush since the other bathroom was functioning fine. So, we took time to define what we wanted — how the new bathroom would function and how it would look.

Once we felt comfortable with our plan, we started looking for a contractor. We met over 10 contractors thorough words-of-mouth and listings. A little over a year later, we got one for the project. 2 weeks prier to the scheduled demo day, the contract was canceled. Frankly, we were so tired to look for another contractor at this point. So, we led it be. The project had been on hold for almost 2 years. Interestingly, this was the best thing we did.

This spring, we met a contractor through words of mouth. At the meet and greet, we told him that we knew what we wanted and were looking for someone who would be willing to work with us to bring our design to the reality. We liked him and got a good feeling. The ball started rolling slowly and surely. He brought the electritian and the plumber he works with to have them check out the project. They gave us helpful advices.

I went over the list of the supplies we had 2 years ago. The double ended tub we picked was not available anymore. I looked around and found one with double slipper. This is actually the style I originally wanted. I couldn't find a style of a fan I was happy with 2 years ago, but this time I found something visually acceptable to me. And, the biggest thing was that I found a diverter which has all features we wanted this time. We couldn't find anything like it 2 years ago, and ended up planning to have something much more costly. So, this blank 2 years brought us such a win.

Eryk the contractor went over the project plan with us to make sure we had everything ready to start a couple weeks prior to the scheduled demo day. He pointed out some holes we had. We were able to take care of them in time.

Then, we said bye bye to our old bathroom. 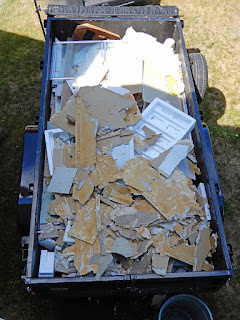 We felt so good in the emptied bathroom even it was not functional at all. 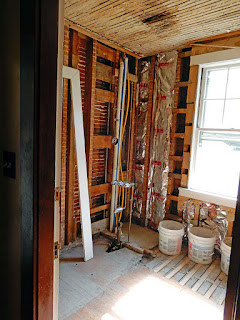 Before they began the demo, the crew put down the picture frames and some decorative things could fall off from the walls in the other side of the bathroom. This is something I felt very grateful to them. We had some moments like this during the project. They made us feel so glad to have them for the project.

Since it's an old house, we had some bumps on the way. But, over all I'd say everything went pretty smoothly. This pandemic made many home owners motivated to do home improvements. Many trading businesses have been pretty busy beause of that. And, towns have been also busy to keep up with inspecting their works. Everything affects each other and our bathroom was done 2 months later.

We had one major functional change because the structure of the house didn't work with the material we picked. So, a different application was used, but it serves the same function as the initial one. The alternate solution worked well. Everything came out as we envisioned. Um, I say "I" envisioned as Chad said that it was hard to him to picture how it would look everything together. I had a clear picture how it would look from the beginning. We are very happy with our new bathroom. It has a vintage feel with a contemprary twist. 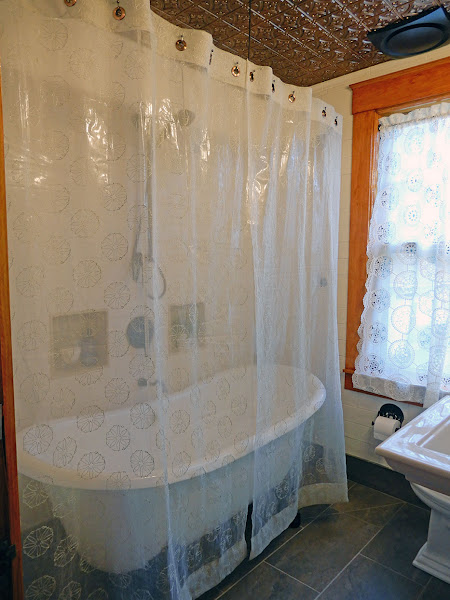 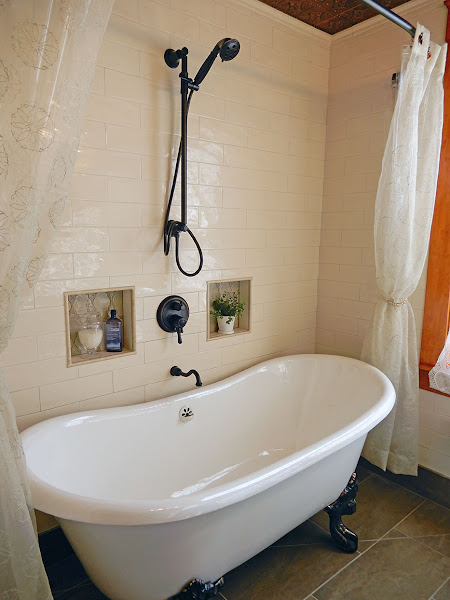 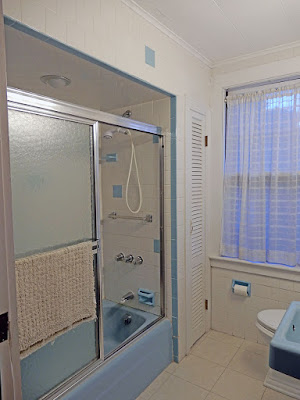 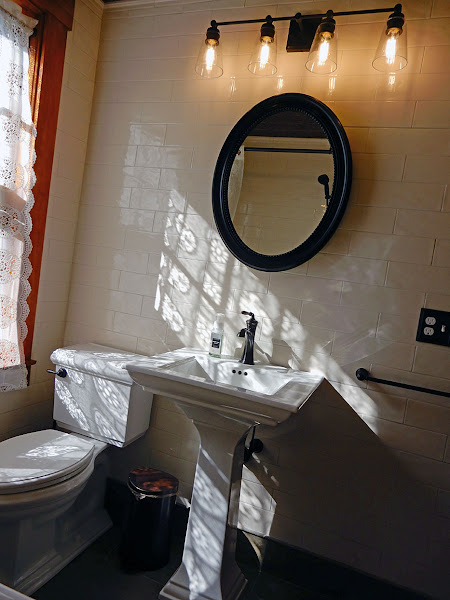 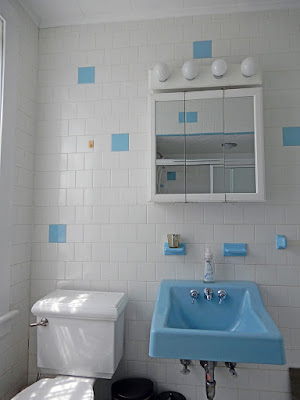 Eryk and his father Glenn run business together as a company, Beanstalk Home Improvements. They communicate very well from schedulling to any concerns and found issues. They were also patient enough to take time to understand what we wanted.

We enjoyed having the crew during the project. They were pleasant and nice to Noelle the nosy supervisor as well. I often hear remodeling and renovation projects are stressful, but I actually had a lot of fun along the way. Their good communication and honesty have a lot to do with it.

As a home owner, I'd like to know what's going on with the project even I don't have specific knowledge to understand all. Just having a sense of what would be a problem or not and what I could do about it would keep the stress level manageable. They expressed their concerns and issues with possible approaches. We talked and decided what to do. Chad and I were comfortable the whole time because we knew we were in good hands. They made sure we were getting what we wanted through the communication at everey step. We would recommend them to anybody in the area for their projects.

Our bathroom remodel was successfully completed. Now, I'm ready to plan for the next project.

I'll share what I learnt from this project from gathering ideas to budgeting — what worked, what not, decision making points, how I managed stuff and so on in the next post.