I was captured a little before last Christmas when I was wandering in the wild, and brought to Smithtown Animal Shelter. I'm a Long Island girl. I was starved and cold for long long time. The long term neglect caused my skin issue and hair loss. With lots of TLC from the kind people at the shelter and New York State Retriever Rescue, I am as good as new now although the hair takes for a while to grow back. They helped me found my forever home.

More importantly, I am a year-round 🎄Christmas girl! Can you tell by my name?😉 I'm always on the nice list and ready to receive gifts anytime. Well, as a year-round Christmas girl, how can I be possibly on the naughty list? I LOVE 🥕🥦🍎FOOD🥓🧀🥩.

Last month, in the MLK weekend, it was a day after Marilyn's 2nd anniversary. Chad and I went to Long Island. It was a freezing windy day. Noelle jumped out of the car and started checking out her surrounding. Then, she eventually noticed we were there. She briefly said hello to us and went back to follow her curiosity. We walked around the parking together. She was happy and friendly. After the quick meet and greet, she went backed into the car and we went back to the boat we came with to return to Connecticut.

Marilyn's bowl was filled with fresh water. It was a beautiful day. The sun was out in the clear blue sky. We got a break from cold. The temperature hit 40s. We were heading to Berkshire. The traffic was terrific. After a little over 2 hours drive, we met Marianne, Noelle's 2nd foster mom, with Noelle.

Noelle jumped into my car with no hesitation. She settled right in with a chew treat on the back seat. Marianne and I went over her information. As we started talking, a beautiful golden retriever walked in front of us. Our eyes were following the dog. We were distracted from the talk. "That's a cute dog!" Marianne said. We, dog people, cannot help checking out every dog we see. It just how we are, and we love to be that way.

Noelle had no idea what was going on. She was busy with her treat. We hit the road again. She was nice and quiet even after finishing up the treat. Once in a while, she stood up and checked the windows and said quick hello to us.

Once we got home, Noelle got off the car and started checking out the yard. Most part was covered with snow, so not much to look around, but she sniffed around. Her exploring continued to the house. She made a couple of quick circles downstairs, then sniffed some spots. She hesitated to use the stairs as if she didn't know what they are. She stared at the upstairs' hallway. I gave a little push on her bum and we went up together. She did fine with the stairs. She looked around in and out each room, then went downstairs by herself. The upstairs didn't interest her so much.

A couple of dog beds were set up, but she kept making circles in the house and didn't know what to do. She came with a pink blanket which she had at the shelter. I put the blanket on one of the beds, then a magic happened. She sat right on it. When I sat on the bed next to her, she got up, sat down making sure her bum touching me. A couple minutes later, she got up again, turned around, sat down, put her head on my lap, then started snoring. It was a long ride. She had another one hour ride with her foster mom before she met us in Berkshire. Not knowing what's going on, having a ride with strangers in a unfamiliar car, finding herself in a unfamiliar place... all events wore her out. That was a very exhausting day to her.

After the nap, she had her first walk in the neighborhood before getting dark. Big laundry was going on since we just came back from our trip the night before. She got nervous with some noise from the washer, but she managed it well.

Dinner time! The biggest excitement of the day to her. We saw her so it called wild side... She couldn't contain her excitement to herself when she saw me walking around with the dog bowl. Humm, how did she know that was her bowl? While I was putting her dry food from the bag, she attempted to put her head into the bag. Once I put the bowl down on the floor, she couldn't wait any longer. We had to pull her back. She couldn't hear anything. She was so focused on the food. Well, she's got to learn some manners. She's not allowed to eat like in the wild anymore. I'll name it the Project My Fair Lady. She chowed down the crunches, then was still hungry. She got some sardine and veggie stew with oatmeal. That didn't last long either. Her bowl was as clean as it was before the dinner.

We ran some errands together. She was very good in the car. She didn't jump out when the door is open. She was curious and looking at the window for the whole time in the car.

We went to Barkery. It was early morning, so we didn't see any other doggies. She sniffed around, but didn't help herself with anything though so many yummy treats in the store. Great job, Noelle!

Chad and Noelle played ball for a while. Chad threw a ball. Noelle retrieved it. Then, they started over the cycle again and again. It lasted for a while. She was excited and had fun. 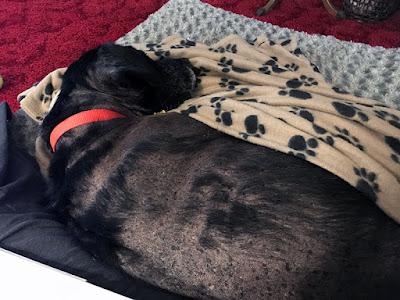 As Andrea from the rescue told me, Noelle is a velcro dog. She follows me around. She loves to touch someone when she settles. Maybe, that's her security thing😢 after being alone for so long in the wild. She loves to jam her head between my body and arm. She loves hugs. She's also a big kisser. She's very affectionate.

Noelle is on 24/7 kitchen patrol. Whenever she detects any activities in the kitchen, she flies over there. Then she comes back with a little disappointment of not getting any food.

She tells when she needs to go out. This is very helpful. She's not so good with recall. We need to work on that. We started with a clicker, but she's so excited with the treats in my hand. I don't think she's ever heard either the clicker or my voice calling her name so far🙄. We have a long way ahead, but we'll get there.

Based on what we've seen so far, it was a right call to wait to have her after our trip. The trip was arranged last fall and it was unable to reschedule. We explored any possibilities to have her sooner, but the bottom line is we had to have somebody to watch her while we were away soon after we'd get her. We were not comfortable with the idea to drop off the dog we were not familiar with to somebody without enough information to pass on. In case of an accident, we didn't want to put the person into an awkward spot. Even though Noelle is generally good, her response to recall is concerning enough. Plus, she had been in a great care by two dedicated fosters. 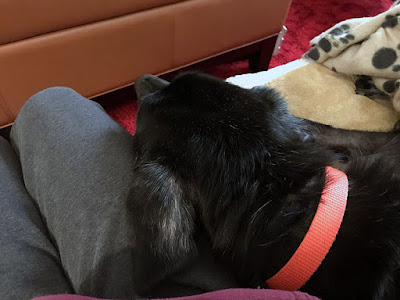 Noelle is a good girl. She is very loving, happy and playful. In this short amount of time, she's already shown so much personality. She's been making herself at home. She doesn't wait for an invitation to the couch anymore. She invites herself🙄. Well, I was warned that she loves a couch. This sort of things just crack me up. Oh, she also likes to open the bathroom door while someone is in it. I can see she'll receive a lot of love by people she'll meet. We're very excited to have her. And, the behind of the whole thing, there is Marilyn. She picked her new sister and brought her to us. Our special girl did a great job.

Noelle is estimated around 8-9 years old. Marianne told me the vet guessed she'd been stray for at least one year, possibly longer than that. We'll never know how she'd got lost and survived. Based on her personality, I think she was very loved and well taken care of by her previous owner. The owner must have been very heartbroken by losing her. She'll never get lost again.

Noelle came to us through love, compassion, dedication, commitment and hard work by people at the shelter and the rescue. We're honored that they trust us for their Noelle. It is our privilege to be given her. So, here is our promise to them that we'll give her the best life we can possibly give her. Here we are again to start a journey. We don't know where it takes us, but we are sure this journey is going to as good as one with Marilyn.

There are so many people like them in the world to save neglected lives. Those are all good animals who deserve good happy life just like everybody else. Because of these people's hard work, they'd get another chance. You could be a part of it by adopting such animals. You might think they are just animals, but they have much better understanding of their surroundings than you think. Once you adopt them, they'd show you their appreciation. Yes, they know you saved them and appreciate that. Besides, they'll make your life so fulfilled and colorful you'd never imagined with their love.