Shopping at an Exhotic Grocery Store 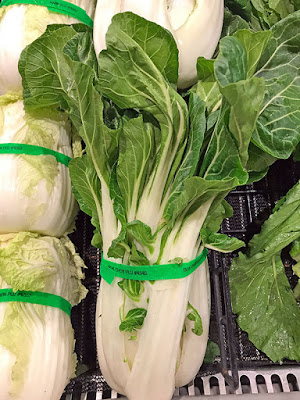 I was at a Korean grocery store the other day. I saw an American woman talking to Spanish speaking workers there. She was asking about Baby Bok Choy. Sure, they were working there, but it's not necessarily they are familiar with Asian vegetables since such vegetables are most likely not a part of their diet culturally. Plus, they were guys. No offence, just think how many guys can name 5 lettuces, 6 potatoes or 6 onions around you. I have experienced kids at regular (= American) grocery stores asked me the names of the vegetables I was buying, which were not exhotic ones. So, go figure what's the odd those from a different culture are familiar with Asian vegetables, not mention they label their products in Korean.

A couple minutes later, I saw her again at the pile of napa cabbages. She was asking some Asian customers browsing the napa cabbages if they were Baby Bok Choy or not. They didn't seem to understand English well. They were paused and showed their confusion. I was close enough to talk to her, so I said to her "No, they are not Baby Bok Choy. You need to look for it on the other side." I pointed the frigid case where they usually put Baby Bok Choys. "If you don't find baby ones, you still find regular Bok Choy." She headed to the direction.

I left the area, then realized that I had forgotten to pick up some vegetables and went back there. I was passing by the frigid produce case, I saw the lady was asking a Chinese man if what she had in her hand was Baby Bok Choy or not. He said "No, but Bok Choys are there." He pointed the pile of Bok Choys. She kept walking down passing the Bok Choy area, then grabbed a bag of green vegetables and asked an old couple who looked like from Eastern Europe if that was Baby Bok Choy or not. The couple didn't seem to understand what she said. They might not understand English well. They were just nodding to avoid any further interaction with her and walked away. She put the bag of the vegetable into her cart, and moved on. That was not Baby Bok Choy.

You are not in Kansas anymore

Do not expect English is the main language at the store

Their target market is their own ethnicities, not Americans. They provide things from their home countries/cultures to their people in the US. They label their products with their languages. You might be able to find labels in English, but not always. Also, people working there might not understand English either. I ran into that situation many times.

You'd better know what you buy. Don't just list up items with names. Google them. Because they could have multiple names from different cultures or geographical regions. For example, I found at least 5 different names for Thai lime leaves. I'm not kidding. You cannot assume which name they use on their label. Oh, they sometimes don't even label certain things especially at small stores.

You'd better look up a couple of things:

When you get a store, imagine you're traveling their countries. Enjoy what you find there and have fun.

I have my favorite Indian grocery store where I get spices and Assam tea. You find a lot of spices there. Fortunately, they speak English. That allows me to learn various things about Indian food, spices and tea. I assume it looks odd to see a Chinese looking person there. They are very kind and tell me a lot of things of their products. I enjoy that a lot. You might be able to find the same information on the Internet, but I think it's more fun to hear from people. If you express your interest and respect to their cultures, they'll share a lot about their cultures with you.

It's a grocery store. Some products could have unique smells. Sometimes, they are quite strong. You might find them unpleasant to you. That is also a part of their cultures. Just keep that in your mind.

When I go to a Thai grocery store two town over, I smell Thailand there. It sounds funny, but it is the same smell I smelt in Thailand. It brings me back to the memories.

I believe it is fortunate to experience a little piece of their cultures without passport and a long flight... maybe jet rag, too.