Once snow covers the ground, it's just nice to stay in the house. Outside is too cold to do anything unless you like hanging out in 20 degrees or below. Then, we get cabin fever or depressed. Knowing how to entertain yourself is a key to get through a long winter.

We moved into this house two weeks prier to Christmas six years ago. Once Christmas was gone and the life in the house started functioning, some bugs started wiggling in my stomach. This is one of those stories...

Cabin fever set me on fire before finishing unpacking from the moving. I'd stayed up until three o'clock in the morning and moving boxes around alone for a couple of weeks. It was time for something new for my own sanity. "What am I doing? This is not fun anymore. I'm supposed to do something fun! This is our own house. We can do anything we want. I'd planned all sort of things before even moving in. Why aren't they taking shapes yet? I WANT MY HOME TO BE PRETTY!!!!!! ARRRRRRRRR!!!!!!!!!!!" A typical cabin fever. I had to do something before being institutionalized.

I picked one of the most painful projects—removing wallpaper. This seems to be a challenge to your sanity, but oh well I just needed something different at that moment. Fortunately, there are only three rooms which have either wallpaper or borders.

As always, you should know your enemy. Research minimizes your headaches and frustration—you've got to do whatever for your sanity. Google is always a good place to start. You see others' experiences a lot through the Internet. Some success stories, some nightmares, silly stories, and etc., etc. For any house projects, I check Lowes website. Under their project tab, you'll find good resources such as buying guide, how-to videos and so on. I also go to Home Depot and ask them questions about tools and material. They are nice and helpful. I like hanging out there learning something new. This Old House cannot be forgotten.

I sprayed water on the wall, gave it a couple of minutes, then peeled the wallpaper. The edges came off, but not the whole thing. I noticed the water was not penetrated to the wallpaper. This was not working well. It was time to make a trip to a hardware store. There were so many tools to remove wallpaper. There, I found this poker. There are two wheels with teeth on the back of the handle. As you go over a wall, the teeth create small holes on the wallpaper. 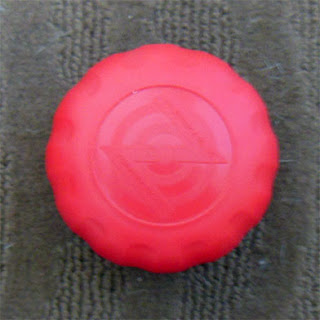 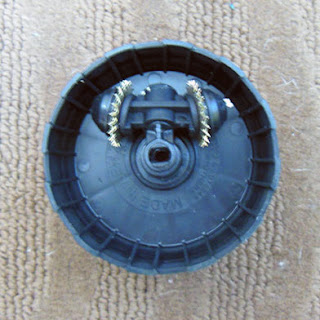 After going over the wall with the poker, I sprayed water on it. A couple minutes later, the wallpaper came off much easier.

This guy helped to peel the wallpaper without damaging the wall. 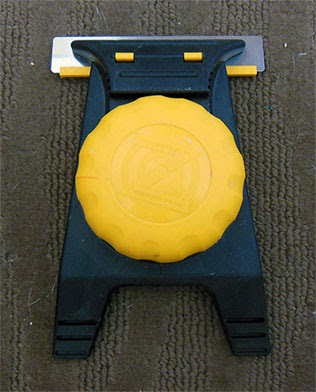 Over the weekend, three walls were done. After all, water just took care of it. Fortunately, there was only one layer. The horse hair plaster appeared under the wallpaper. It seems the previous house owner took care of older wallpapers. Lucky me. 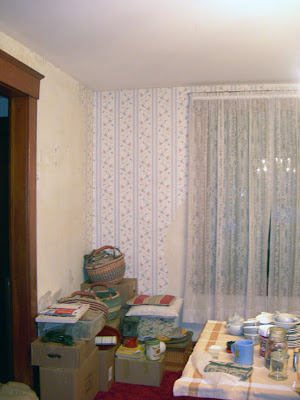 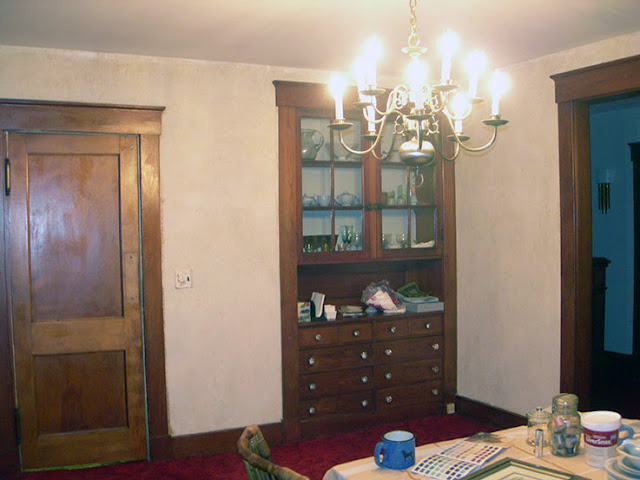 It's time to think about primer. I'd never painted old plaster. Something should be different from drywalls, I thought. During the research, I found a story that somebody used latex based primer, and the paint peeled off with the primer from their wall one week after they painted. How frustrated they would be! This made me think it's better to use oil based primer even it takes longer to dry and its smell is stronger than latex based one. This is not a good project in a cold weather. The project was paused until it got warm enough to open the windows.

In the fall of the year, I finished primer. The room looks much brighter. At last, the prep work was complete. 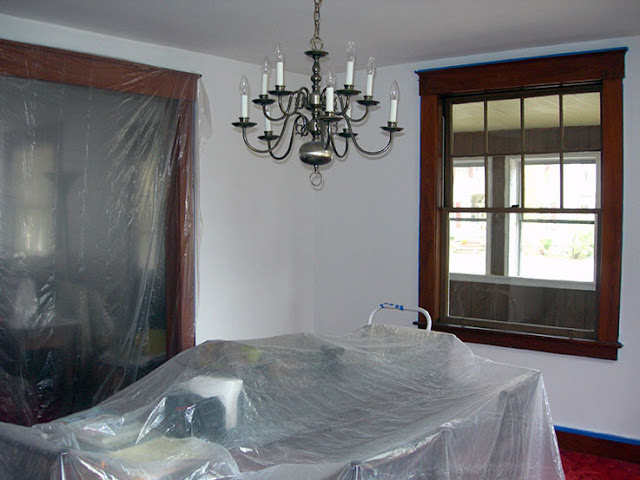 Now, the fun part begins. You start seeing the dramatic progress. Once the base color is painted, the room looks much better getting out of the hospital room look. It got a life. 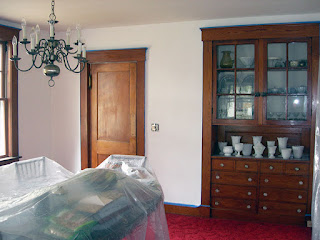 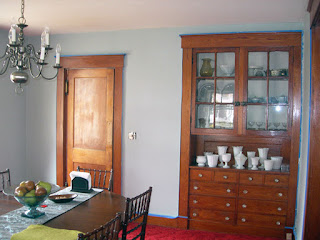 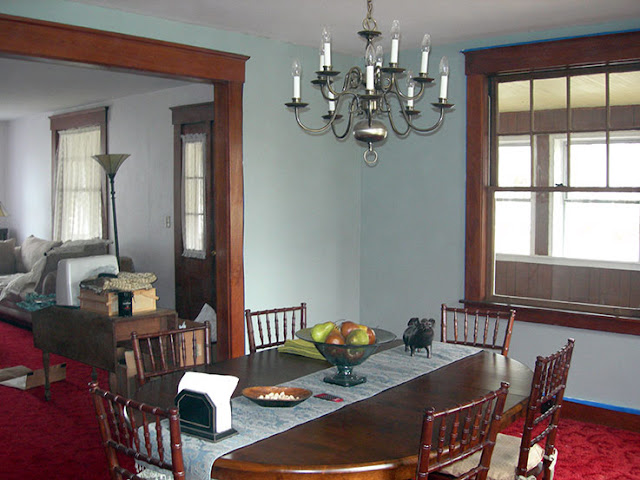 Before moving into this house, I found the stencil at Etsy for this room. The shop is gone from Etsy, but you can find it at Maison de Stencils. It's highly recommended. They have beautiful stencils.

There was a miscalculation. Because of the details of the design, the paint easily got under the stencil sheet. I had to wash it after every application. This made the process extremely slow down. I had thought this would be the most exciting and fun part of the whole project. I was wrong. It was a totally nightmare. 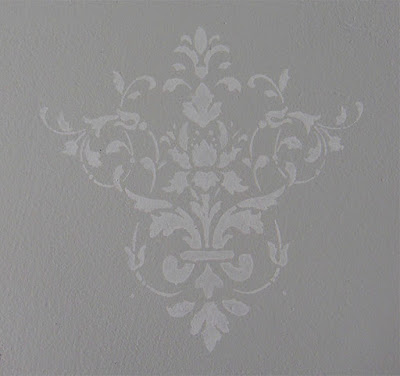 After the agony and some time, it was finally done. Yay! I love how it came out. On the other hand, I swear I would never ever do stenciling again! 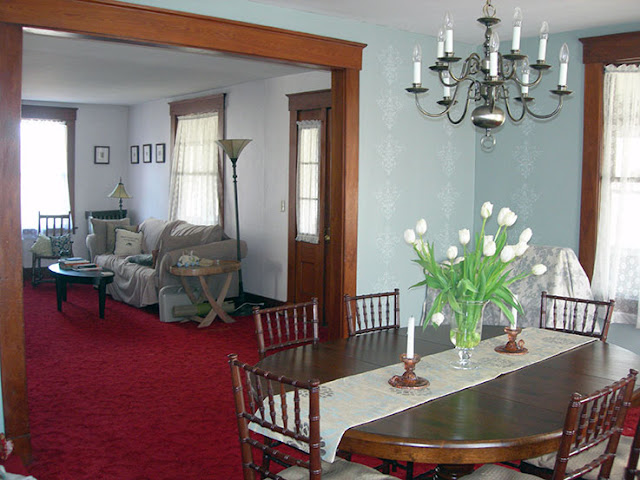 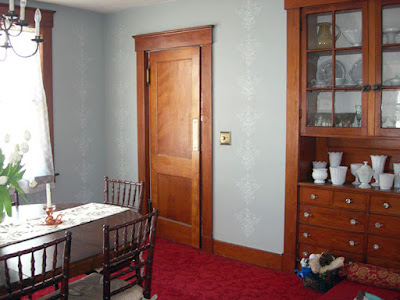 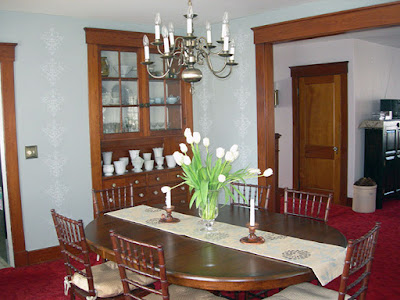 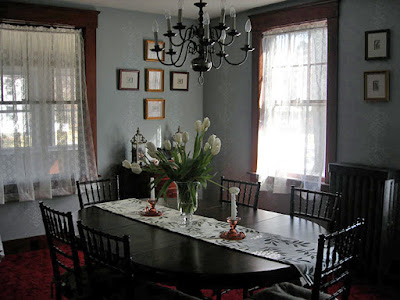 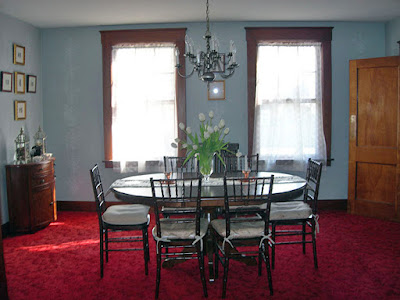 I thought this would be the end of the project. Oh well... Once the walls were done, the ceiling started grabbing my eyes. It was just too bright against the walls. I didn't like it at all. It's time for painting again.

Lighting is always tricky and interesting at the same time. I applied the same color as one for the stencil on the ceiling, but look how dark it appears on the ceiling. 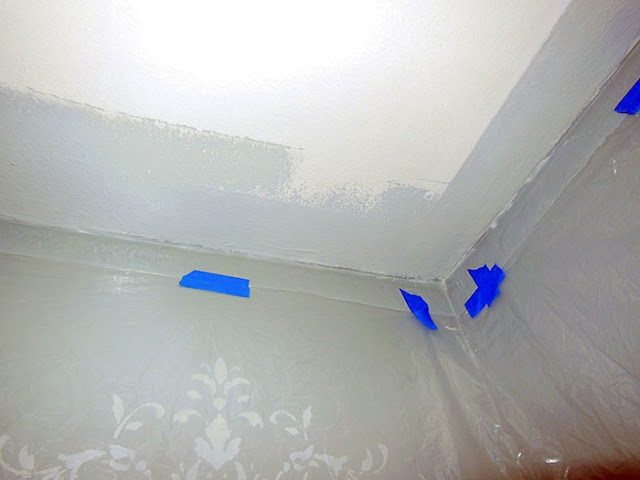 The ceiling came out slightly lighter than the walls. I expected to have a little bit lighter color than that, but it's ok. Now, the ceiling is blending into the walls. Nothing jumps out. The paint is also shinier sheen than the walls'. It reflects light better and helps brightening up the room. 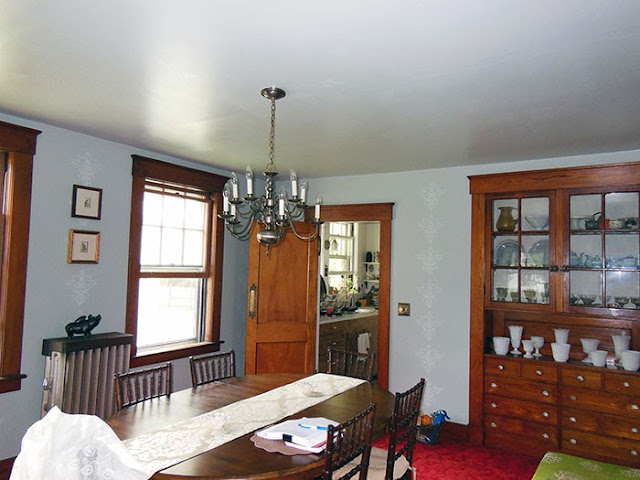 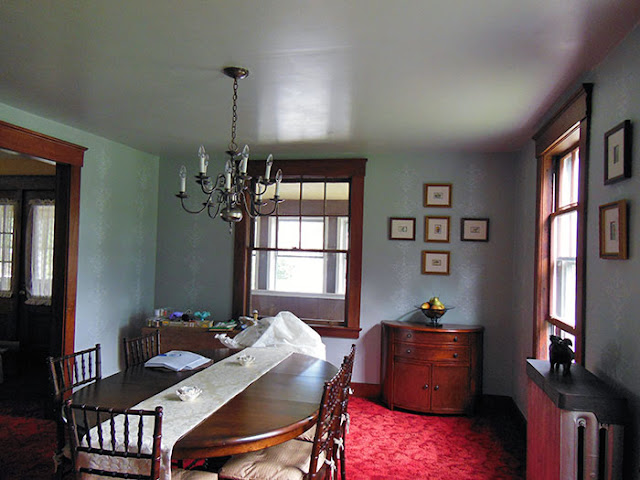 It took two years to get there, but I cannot be happier. I don't say the dining room is complete, but I can say its painting job is done. No more painting.

Maybe because of the design of the stencil, people think it's wallpaper. It is STENCIL, Baby!