When we came to see this house, Wendy, our realtor, told us that we would need to re-support the side porch. It was tilted, but not in a dangerous way at that point. It was not a deal breaker, so we bought the house. We had focused on more important things such as rewiring the house(well, welcome to the old house. it had knobs and tubes when we moved in). Last winter, we noticed the columns are visually tilted and the roof was sagging. Sadly, the downspout was not even connected to the gutter anymore. Chad and I agreed "Well, it's time." 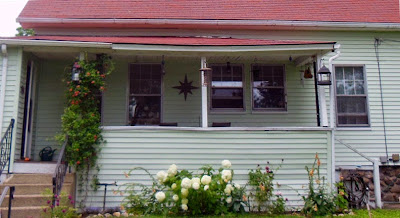 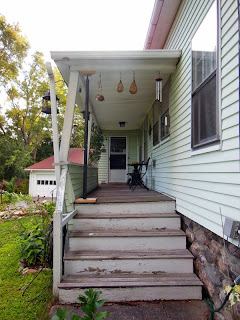 We had some contractors come in and got estimates. Then, we met our favorite contractor, Tom! He is honest and a good communicator, understands our care and thoughts for the house. And he has great ideas!

I did some Photoshop work to create a finished visual, and we submitted it along with other paper work to the town. Once our plan was approved by the town's Historical Districts Commission, we were good to go. Our house is not a historic house, but it locates in one of the town's historic districts. Why is the area a historic district? On April 19th, 1775, minutemen walked down the road in front of our house to Concord. Yes, they were heading to the Battles of Lexington and Concord. Then, the Revolutionary War began. We have a couple of giant white pine trees along with the road. They watched over the minutemen marched down. They witnessed the history. Pretty cool, isn't it? The historic district is specified along with the road. The Commission cares the aesthetic of the areas. So, people who live in the historic districts need to get their plans to make exterior changes including their yards approved by the Commission. It is not so old. Unfortunately, things done before it was founded, stay as they are just like our ugly green vinyl siding. 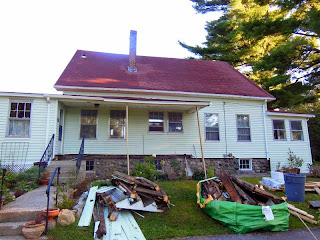 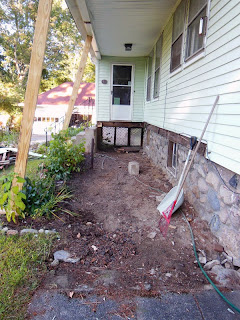 It happened while I was at work. I missed all fun watching the ugly porch disappearing :-( It looked so weird nothing over the door when I looked at it from the mudroom.

The crew discovered somebody was living under the porch. They covered the hole and took care of it. The eviction completed. No more woodchuck. If you don't pay rent, this happens. And, my parsley won't lose its leaves.

"Look, Mama! The floor is here. We can use the porch again." Ummm not quite, Marilyn. 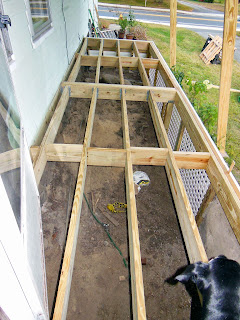 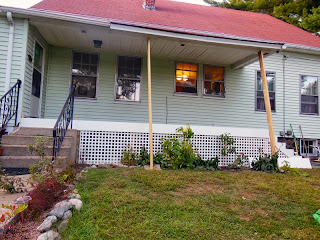 Once the siding is gone, it looks so open and much better already. The lattice covers the whole porch. Where the siding used to covered can get better air circulation now. There used to be openings at the staircases. They were big enough woodchucks could go through. I saw the chubby body getting in and out quite often during the summer. The covered and dark area attracted critters, but not anymore.

Well, I had to cut down all honeysuckle vines, but it grows quickly. Hopefully, it grows back when hummingbirds come back next year. It was overgrown and I lost a control of it. So, this is a good opportunity to reshape it. I won't let it go crazy again. It's going to be a well trained good looking honeysuckle.

Chad originally wanted composite boards for the floor. Tom suggested, well had already ordered, blue fir. Tom was right. It looks beautiful and appropriate to the house. Oh, did I mention it smells good, too? 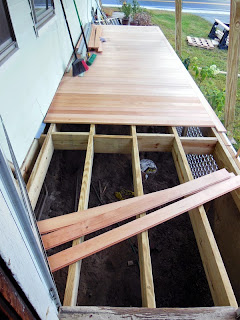 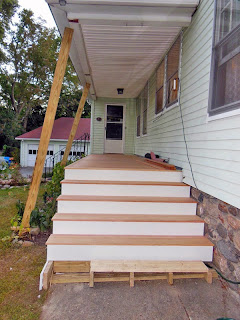 Ceiling with a Twist

We wanted beadboard for the ceiling. This can be continuous texture from the mudroom. Tom and his crew ripped off the ceiling. 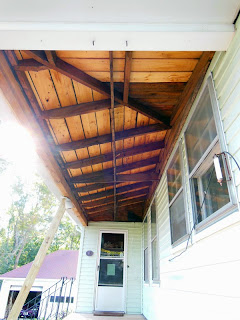 Tom suggested pitched ceiling instead of one parallel to the floor. 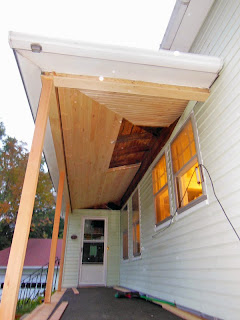 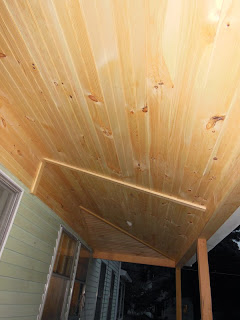 This added not only architectural interest but also a sense of openness.

To be architecturally and historically correct, we should put wood spindles under the railing. But, I wanted wrought iron balusters instead.

We, most likely I, had a fun with playing around with patterns. I wanted a simple pattern just enough to give a visual interest. This kind of mixing wouldn't happen with wooden spindles. Plus, iron balusters are slimmer than wooden spindles. So, they all together look much cleaner and more open than wooden spindles. When we redo the concrete steps and walkway, the railings for the steps will carry over the pattern. It will look much more consistent. 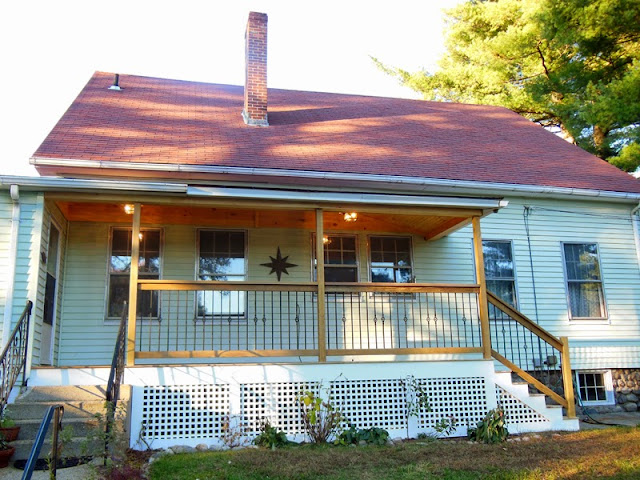 Also, it happens to match the bird feeder pole! 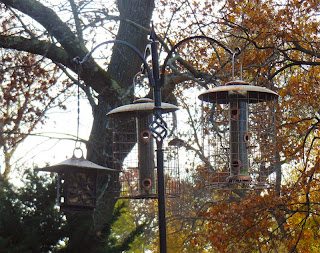 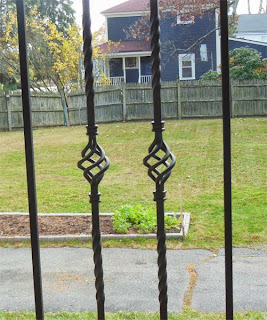 We're going to keep the natural wood look, and let it age naturally. Right now, the tone of the wood brightens up the area very much. We are very happy how it came out.

The crew was neat and the site was always nice and tidy during the project. 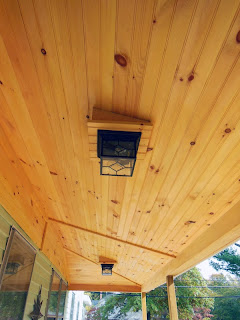 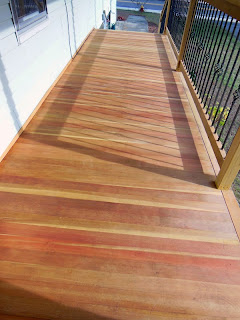 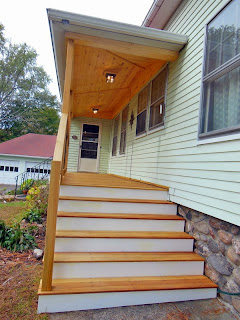 Tom said I could start decorating, but I feel bad to put nails on the columns to put plant hangers on. They are just so beautiful as they are.

The gutter lost a downspout. Downspouts are not pretty. I've seen some interesting connectors to gutters and bottom ends, but nothing in between. Their bulky look just grabs your eyes. I also didn't like the idea of its support hardware touching the porch column.

So, I got a rain chain instead. It looks almost nothing there from the distance. That's the look I was looking for. When you're close to it, you can enjoy its beautiful double chain design. When it rains, water runs down the chain gracefully. It's a peaceful view like watching a dewdrop coming off the edge of grass.

The store had bowls to catch water on the ground, but I don't like their "look at me!" look. They are so big and bulky. They stand out more than the rain chain itself. The delicate design of the rain chain is totally taken away by them. I don't care for things begging or screaming for your attention. I love things with delicate and subtle details. You might miss them if you're not paying attention. On the other hand, they are the things tickle you. When you find them, you get excited and appreciate them. Some people put a flower box at the end of the rain chain. That doesn't work in this case.

I just wanted a natural flow like water lands on the ground and goes away. It's next the stone edged flower bed. It would look nice if they are integrated. To make it blend into the flower bed, I put some river rocks where the rain chain ends. Next spring, I'll extend the flower bed. Once it's done, I'll shape the frame for the water pool. This is just enough to get through the winter. 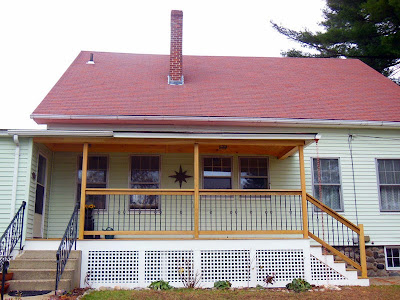 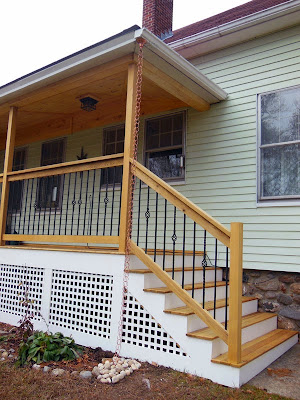 At the morning walk with Marilyn the other day, a neighbor I'd never seen before said to me "By the way, your porch looks great!" I think she recognized Marilyn who is the one always hanging out in the yard. It's nice to hear somebody tells me that. She made my day.