Bring It Back to Life

I've seen them on HGTV, read them on blogs, and never gotten a chance to try it by myself... That looks pretty exciting to do.

One man's trash is another man's treasure.

I was running errands and driving through a residential area the other day. A sad kind-of windsor looking bench on the side of the road caught my eyes. I passed the bench. I had been looking for a love sofa for the living room. My search had not been successful with either styles or prices. "Maybe, I could paint that poor bench, toss some pillows and live with it until I find something I really like..."

A couple hours later, I was standing in front of the bench. It was a worse condition than I thought. The webbings on the seat were stretched out. Its height was much lower than our couch. I didn't like its 70's look at all. "What do you think?" I asked Chad in the car. "Whatever you want. I've never thought you want somebody's trash." Hum, very helpful. No, I'm not interested in trash. I am interested in possibilities. If the tired bench would just sit in our living room as it is, why bother? I was assessing what I could do with it and if I could handle it. While I was staring at the bench, Chad said "It's free. The worst case, we can sell it at a yard sale." That's one way to look at though I don't agree to what he said. Thus, the bench came to our house. 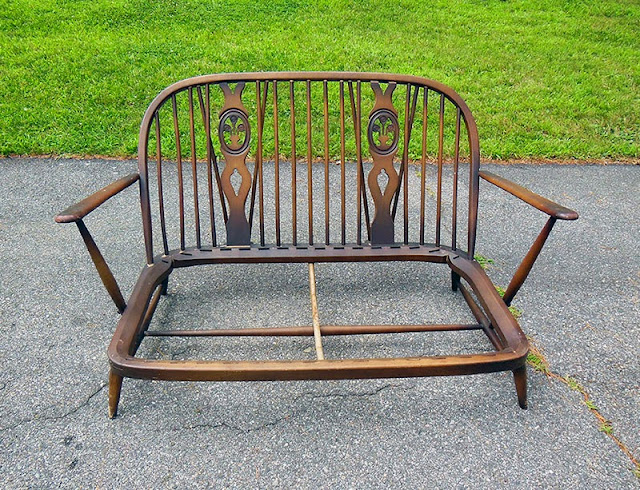 I removed the webbings, then hosed down the bench. Here was my plan:

A key thing of this project is not to put too much money into it. If it costs $500.00 to restore, it's better to buy a new one.

It was a Dachshund/Corgi bench. To match the height to our couch, it needs 12" feet. After shopping around, I found one at Home Depot. I don't like the metal at the bottom, but it can be painted. Its texture is rough, but good enough for my project. 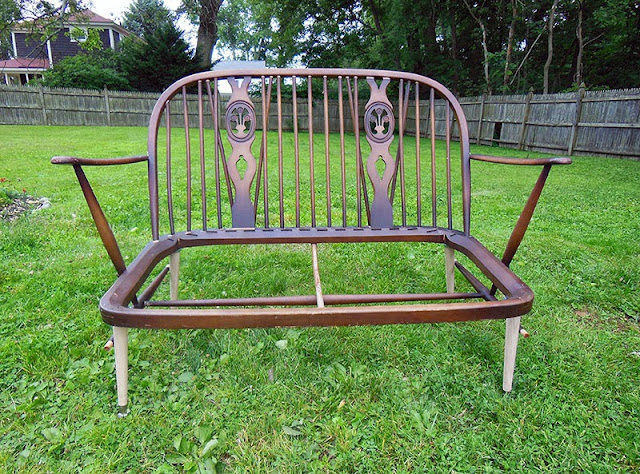 The original legs were cut off. The legs need to be installed with angles to be visually balanced. I used angled plates to attach the legs. They look straight from the front, but you see the legs from the side spreading toward front and back.

Checking out blogs by people restore furniture, I learned Rust-Oleum Painter’s Touch Ultra Cover Multi-Purpose Brush-On Paint is suitable for wooden furniture because it's thinner than a regular interior paint for walls. Actually, stain could add the bench rich texture, but it was already stained, and the legs doesn't have the same color as the bench to begin with, they wouldn't match the color. So, I decided to go with a paint. 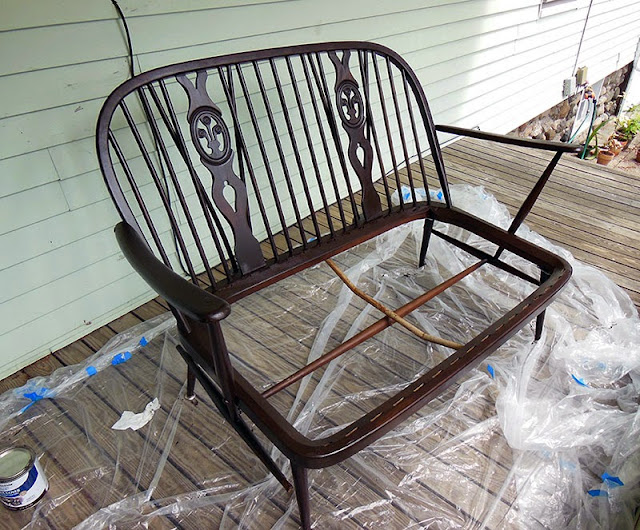 Two coats of the paint made a difference. It doesn't look so 70's anymore.

First, I was looking for upholstery jute webbing, but happened to find stretch webbing. Since I don't have any special tools for upholstery, stretch one seemed to be easier to handle. I was also surprised the variety of material on eBay. 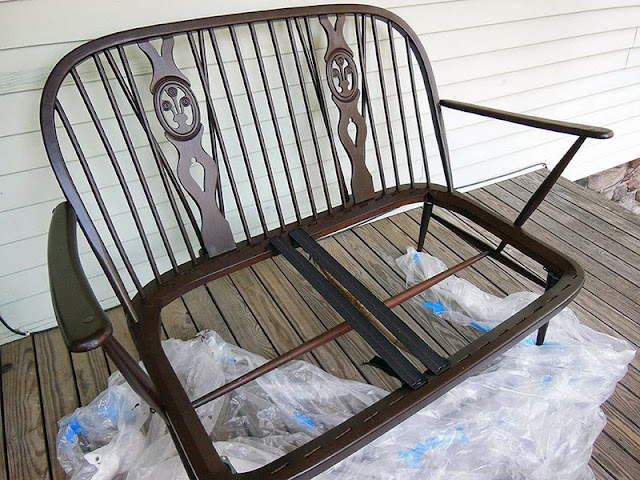 Using stretch webbing was a good call. I think it depends on what you work on, but it worked great on this bench without a stretcher. 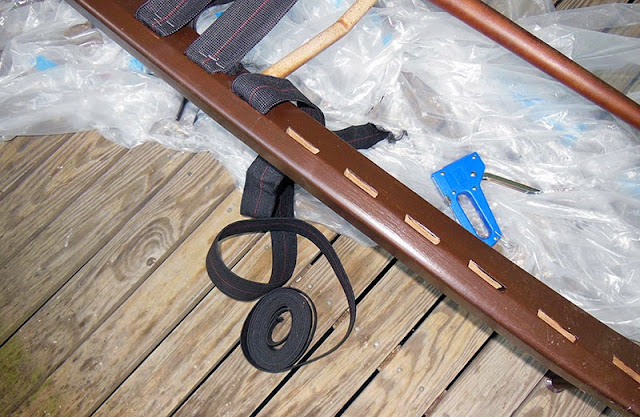 Just putting it through each hole, stapled down one side, pull as hard as you can, check the sound of the webbing by tapping with a finger, then staple the other side. Repeat...

My stapler is for craft. It's for a light duty. I used extra staples to ensure holding the webbings. It looks ugly, but it wouldn't show once a cushion is on it. 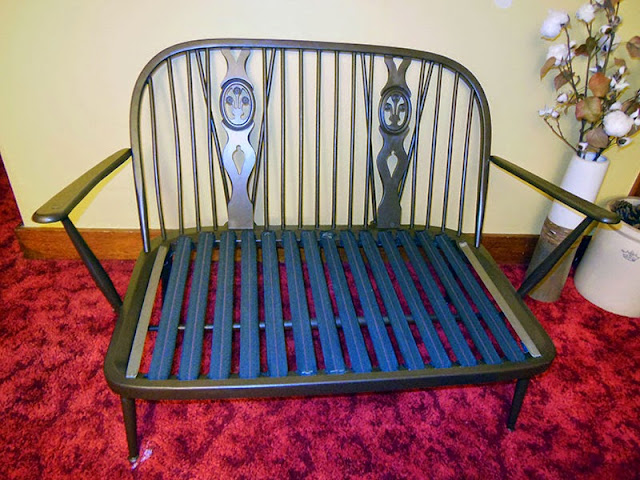 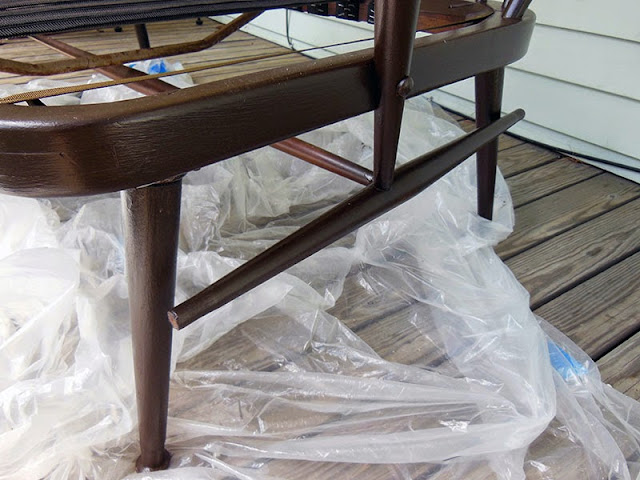 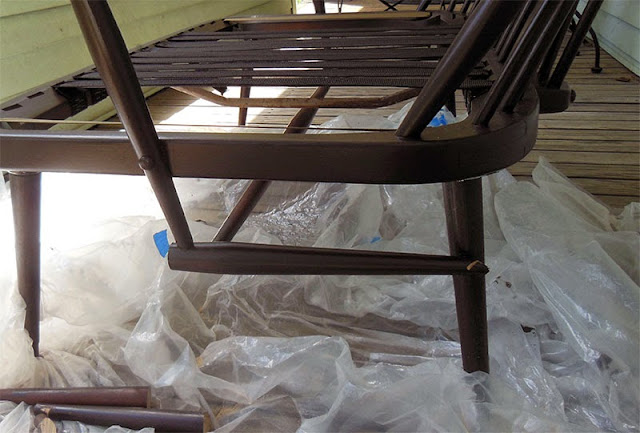 I found some precut wooden disks and balls for doll head at a craft store. I put them together and glued them on at the cut surface. At the back side, I sliced the bar in angle, screwed it down on the back leg, put some filler to cover the screw head, sand it and pain it. The problem is solved. 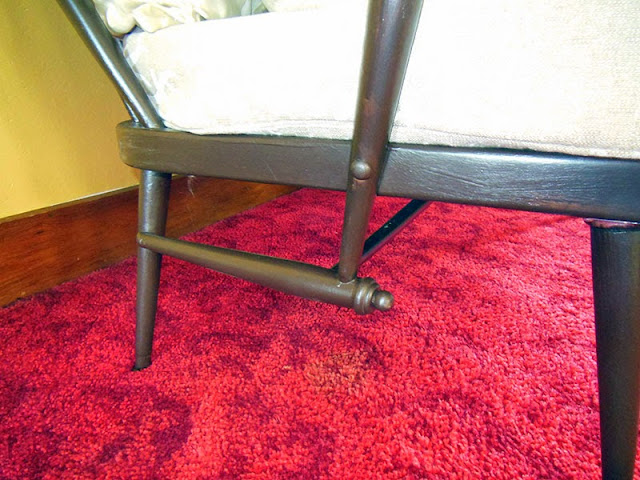 Because of the time of the season, bench cushions for outdoor furniture were on sale. I was hoping to get one of those and put a cover on. Well, nothing is easy. The bench was deeper than regular outdoor furniture and those pre made ones don't fit.

Upholstery form is not cheap. It's not a kind of money you want to spend for your temporally furniture. I went to Big Lots and found a cheap bed pad. I cut it down to fit the bench, made three layers out of it and made a cushion. 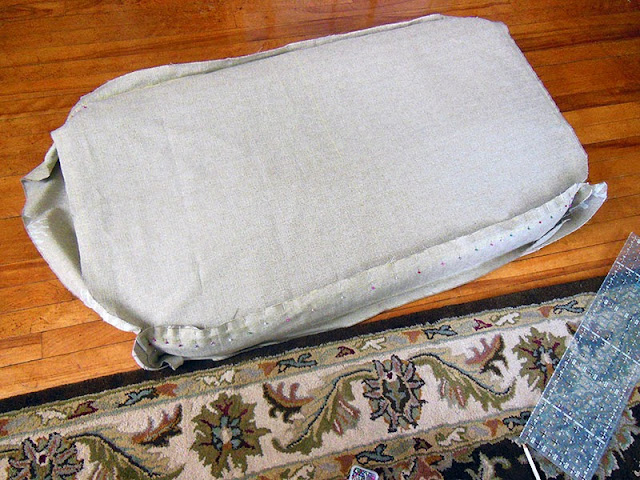 I had a fabric purchased for the chair pad covers in the dining room. Unfortunately, its pattern was too big for the covers. Now, the fabric turned to be the cushion and pillow covers for the bench.

I got two 20" down pillow inserts. They were too short to cover the ugly back decoration. Also, the bench was still too deep with the pillows on the back. I got two 24" down pillows. I usually get down pillow inserts since they last longer than polyester fiberfill. Down fill is more expensive, but it's well worth it. They are always full and fluffy. 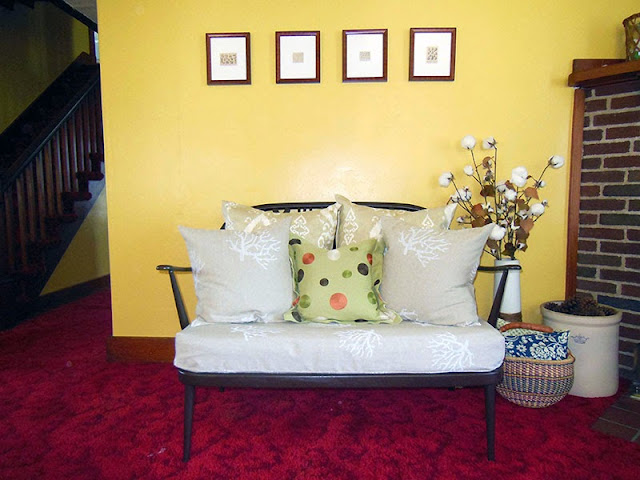 Since the fabric ran out, the big pillows got different covers. 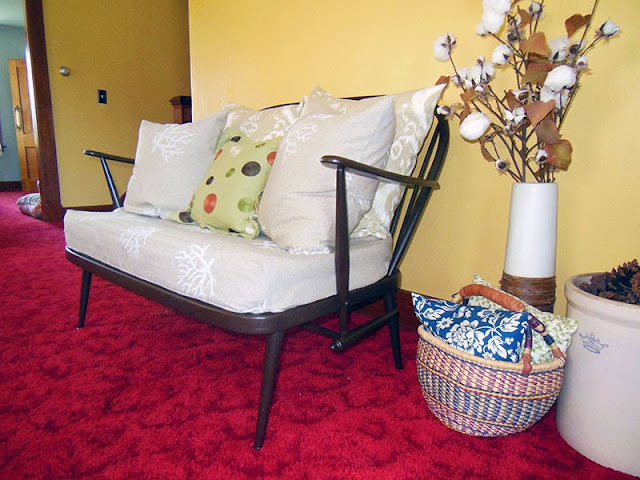 Thus, the trashed bench got the second life. It might just wish to retire, but not yet. This type of projects always have some surprises along the way. They make the projects much more fun. I'm not thrilled to look into trash on the street, but I might try this type of project if I find a right candidate at a thrift shop or a yard sale.

FYI, here is the cost of the project.