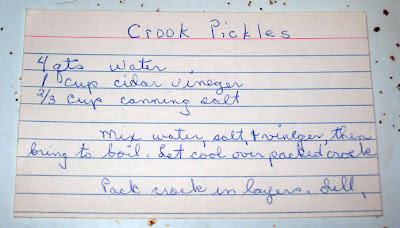 Aunt Bev makes the best pickles in the world. It’s not overpowered by vinegar. It got a great balance of dill and garlic flavors with a nice crunchy texture... It’s heavenly good. In fact, her grand children love them, too. Once they find out she made pickles, they sneak into her basement and snack them out of her crocks. She just tells them to make sure their hands are clean when they put their hands into the crocks. One of them asked her pickles for his graduation party. They are just that good.

When she found out I love her pickles, she gave me her recipe. I'd just put off to try it making bunch of excuses. I guess, I was so afraid of getting disappointed to find out my pickles wouldn’t be as good as hers even with her recipe.

One time, she gave us a jar of pickles. I returned her the jar filled with New Englandy Christmas ornaments—she is in Ohio. Of course, sending back the jar was "hint, hint." Uncle Dan told her that I was hinting something. Then she sent us this special pickle with a newspaper article about it. Since then, this pickle celebrates the holiday with us every year. 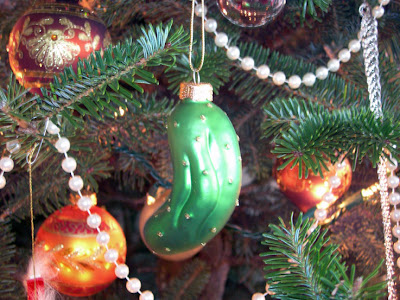 According to the tradition, it's supposed to be hidden in a Christmas tree, and you go find it. But, ours is always at the best visible spot on a tree. We show off this cute pickle. 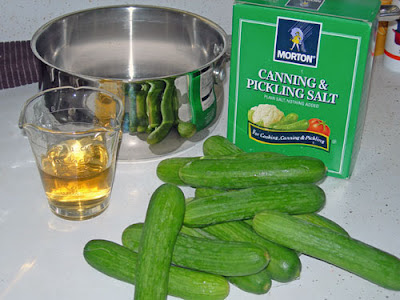 From her recipe, I learned a new thing... canning salt. I’d never heard such thing in my life. I googled it.

I translated this to "it’s purer than regular salt". My next question was where I can get it. This question was easily solved. According to Google, Walmart has one. Probably, any grocery stores carry one. But, I’d never recognized one. I got the last one on the shelf. My lucky day!

I wanted to use dills from my garden, but they didn’t seem to be enough. Oh well, I had to get some at a grocery store. I thought there is a pickling cucumber for pickles, but didn’t see any at the store. So, baby cucumbers were picked instead. 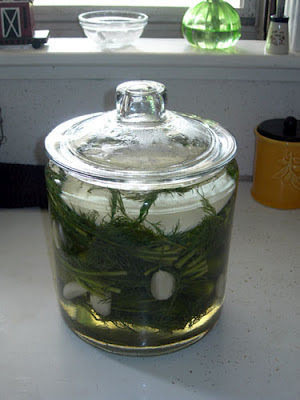 I prepped brine. Then, I noticed that I didn’t have a crock. How could I forget about this? I have some vintage ones from a flea market, but I was not comfortable to use them. You never know what it was used for. I also wanted a lid to fit a crock. As far as I looked around hardware stores, a crock pot usually doesn’t have a lid. Why? They don't care dusts and bugs get into a crock? Target has glass jars with lids. I got a one-gallon jar while waiting the brine got cool down.

After silly running around, the layers were made with dills, cucumbers and garlics in the jar. Then, the brine was poured over them, and it got a hat of a small plate. The jar was placed in the basement.

Five days later, I took out some cucumbers from the jar. Chad had the first bite. "The center is very soft." That was his first words. I had a bite. The center was soft, which makes sense the seeds part is the softest in a cucumber, but it was too soft. I noticed it was missing crunchiness. It was not as crunchy as Aunt Bev's. My first pickles were not a satisfied result. Anne at work told me the difference between a regular cucumber and a pickling cucumber. I learned it is a matter that which cucumber to pickle. It's got to be a pickling cucumber. That's how I got "Pickles 101." 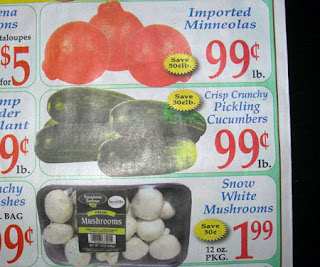 This week, pickling cucumbers are on sale at the grocery store. I decided to try again. I picked firm ones. They are just like the Christmas ornament—short and chunky. 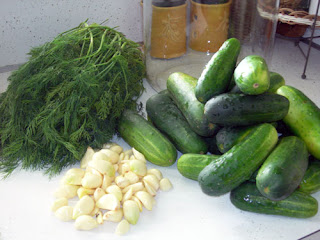 This time, I use a two-gallon jar. Dill, cucumbers and garlics are in layers. The brine was poured to the jar. The last time, everything looked good at this point. Let's see how they turn out in five days. 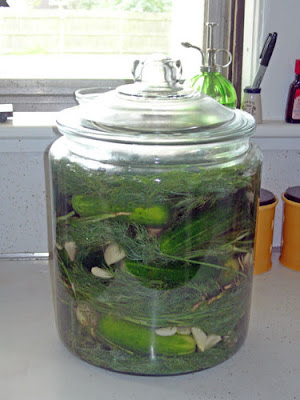 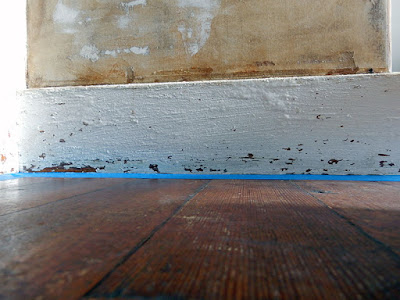