Taking off the Layers 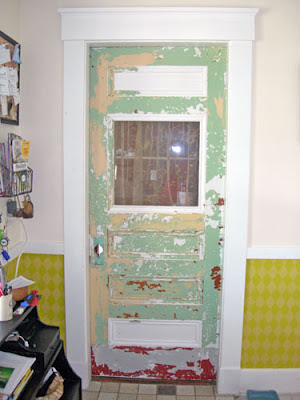 It started with its broken door knob. The 80's shiny brass color knob had gotten losen quite often and also tighten up whenever it got to the point that the knob didn't function as a door knob.

The solution is replacing the knob. So, I got a new one. It was supposed to be an easy project. Once the old knob was removed, another problem was revealed. The area covered by the door knob plate had a different color from the rest of the door. Even worse, a piece of paint came off. The piece was thickness of card stock for a thin business card though that was only the top layer and there were more layers of colors left on the door. I kept peeling the layer to assess amount of work I need to put into. The assessment was extended to actual work. More I peel, more paint got lifted. As if it was saying "Peel me!" I kept going. I was not even using paint stripper. This is bad. I decided to scrape off any layers as long as it didn't requie any muscles. Two weekends later, this is what I got. Hope none of the layers are lead paint. Well, it's too late to say this though.

Originally, this door was finished with shellac which I found at the bottom of the layers. I don't know what made them to paint over the shellac, but that was a very bad decision. The door is supposed to be as beautiful as this one. The paint colors indicate when they got put on. I can see some nostalgic side, but it's an arts and crafts house. Exposing the beauty of woodwork is the style of arts and crafts. They shouldn't have touched any woodwork. So, what I want to do is refinish this door with shellac in as close shade as the other door. Shellac is not just a pretty face. I found the article, Tips For Using Shellac, on the American Woodworker's web site. Cool stuff! 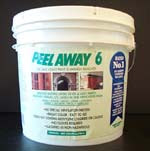 The door is ready to apply paint stripper. Thank God, it's only painted on one side. This makes my job much easier. I've been using Peel Away 6 which is biodegradable. I have to mention that this might not matter after use since it contains paint though I love to use and support eco friendly products. After all, as long as it contains paint, it doesn't seem to be good for the environment. Anyway, the most important thing to point out is this stuff works like a charm. No harsh smell or anything. It doesn't damage material's surface even it's plastic. I used it quite a lot to clean up my stencils when I worked on the dining room walls. Another thing I like about this product is easy clean-up. 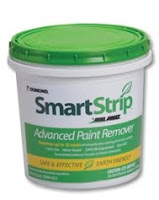 I just found out it has been discontinued and replaced with Smart Strip. This is also biodegradable. Smart Strip has been in the market for at least 5 years now. In fact, I originally looked for Smart Strip, but couldn't find any at local stores. Then, I picked Peel Away 6 instead. If my left-over Peel Away 6 is not enough for the door, which is most likely, I'll try Smart Strip. It is interesting how it's better than Peel Away 6. Hopefully, all layers come off cleanly and the door has its original beauty back. I'm already crossing the fingers.